Last week I suffered a major blow… a huge professional disappointment. It was devastatingly shocking, and I found it difficult to crush back my tears and proceed forward. My first instinct was to give up. I thought, “That was my absolute best… if my best is not good enough, then I am not good enough and I should just quit trying.” I felt broken and helpless and so very discouraged. I swallowed tears for a few hours before heading home and letting the floodgates open. My children and husband hugged me and gave me those shocked looks of sympathy only evoked when mommy acts totally crazy… you know, the kind of helpless expression that exactly mirrored the helplessness I felt inside. Time, as always, was a soothing balm, and 24 hours later, I was still disappointed, but no longer weepy and heart-broken.

The following morning, I woke up and dropped my kids off at school, where a priceless friend met me in the parking lot to take my littlest daughter and give me kind words of reassurance, condolence, and love. Meanwhile, seeing her sweet, caring face only proved to make my tears relentlessly slide down my face. I hurriedly left, trying to salvage the mascara I had stupidly applied that morning. I won’t pretend to be perfect at handling setbacks, but I will say that I have come a long, long, long way in the world of coping mechanisms and strategies. You see, for nearly two decades I struggled with bulimia, alcoholism, and drug addiction. My book, The Pathways Home details the debilitating struggles of feeling such inadequacy. For almost two decades, the world’s reverberating message plastered on every billboard, magazine, and sign told me the same thing: You are not enough. And I believed them…for far too long. I wrote a whole book. And then, when I had this one disappointment after a decade of sobriety and learning my actual value, for a split second, I let those old demons creep back into my mind. They urgently reiterated the same distorted message that caused me (and my family) so much anguish all those years ago. You did not get the promotion, so you are not enough. But this time, I did not succumb to the lies that our consumer-driven society was selling. Instead, I thought, how can I handle this? Where can I turn for peace?

I drove with tearful eyes to a place that I could turn to for peace. For me, it is the temple, but I know that peace is found in different places for all of us. In the case of disappointments, figure out where you can turn for peace. Then go there. It might be different each time based on the circumstance of your trial, but listen to your inner voice and go where you will feel peace. While there, I realized that I needed to go visit my dad’s grave. I have never been there by myself, and I have never considered the cemetery a place of peace for me. It was actually quite surprising when I instinctually felt the urgent drive to go there.

Upon arrival, I realized how important it was to be there. Again, as tears rolled down my face, I heard over and over again in my tender daddy’s voice, “Lenaya you are so capable. You are the most capable person I know.” That word, capable, played on repeat in my mind until I knew that the adjective he had described me with my whole life was every bit as applicable in the face of a disappointment as in any other time of my life. I left the cemetery feeling buoyed, confident, and strengthened. Then, on the way home, I got a sweet phone call from my husband, who said all the things I needed to hear. This further emboldened me to know beyond a doubt that this was not the end of the world, nor was this the end of my attempts to procure this particular promotion. I would try again… and again… and again if need be.

By the time I returned to my friend and gathered my littlest, I felt that surge of excitement that often accompanies risks, courage, and willingness to look at challenges square in the eyes, perhaps afraid or even terrified, and proceed forward anyway. Of course, I was still disappointed, but rather than feeling like that meant I was not smart, talented, intelligent enough, I understood that set-backs are the very thing that make us who we are. How can I expect to have strength of character if I have never had to persevere? I realized I needed to apply what I already knew: We have to experience trials in order to grow.

Later that evening, on a date with my hubby, I saw a sign that said, “Grow through what you go through.” 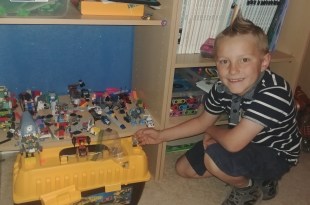 A few days later, I overheard my 6-year-old son talking to his Legos. He was berating himself for being bad every day, for having all bad days, and for being a bad person. Fear gripped my heart in the way that happens when we see something in our children and instantly ask, “How did I miss this?!” My husband gently asked him what he was talking about. My son explained how he threw fits, and talked back, and disobeyed every day and so he always had bad days and he was, in fact, a bad person. I listened as my husband softly explained how important it is to use our trials for growth, to learn from our mistakes and become better. I interjected that bad choices did not equate bad person; that he is a wonderful person, and no matter how many bad choices he makes, he will still be a wonderful person. But also, my heart broke a little as I realized that I have not clearly illustrated to him, or my girls, the importance of disappointments and trials. As a parent, I often hide my own heart-ache in what I thought was protection, which has turned out to be a major disadvantage. I realized the way I speak to him, the way I discipline him, and the things I share with him in my own life’s journey need to change.

Later that week, while at a fabulous family literacy class I have been taking with my son, the first part of the presentation was about how we speak to our children and what is called a growth mindset or fixed mindset. (Divine intervention much?!) The presenters spoke about the importance of using failure as a way for learning and using praise when children have to struggle through something that is really hard. The example they gave was if your child easily learns a skill, reading, counting, whatever, and you say, “You are so smart,” then what happens when they have to work harder at acquiring a skill in the future? Do they internalize that they must be dumb since this is not an effortless acquisition of skills? Instead, the presenters urged parents to praise children by talking about how hard they worked, how they stuck with it even though it was hard, and how they tried again after failure. Rather than them feeling like a failure themselves, they are able to build their confidence and trust in their ability to overcome obstacles and not be defined by their failures.

“At the heart of what makes the ‘growth mindset’ so winsome, is that it creates a passion for learning rather than a hunger for approval. Its hallmark is the conviction that human qualities like intelligence and creativity, and even relational capacities like love and friendship, can be cultivated through effort and deliberate practice. Not only are people with this mindset not discouraged by failure, but they don’t actually see themselves as failing in those situations — they see themselves as learning.”

On this same website, there is a comparison of the two worlds, a fixed mindset and a growth mindset. Dweck states:

So, the moral of the story: it is CRITICAL that we embrace disappointment, failure, set-backs, and challenges as a BENEFICIAL part of our journey. I need to be better at teaching my children how important failure is. I need to show them how I handle disappointment. And I need to grow through what I go through so that they can have that example in their lives. This is a lesson we all have to learn throughout our lives… sometimes repeatedly. But I know that I can do hard things, and neither my accomplishments nor my failures define me. Instead, the way I handle both will determine the type of person I am and can become.

Together, we have to overcome the often deafening voice saying that we need to buy x, y, and z in order to be enough. Instead, by changing our mindsets, we can learn that our disappointments and how we handle them might be the very thing that makes us enough.

Author of, The Pathways Home: A Memoir of Sisters on Both Sides of Addiction, Lenaya Andersen is a Northern Nevada Native who cherishes swimming out to the buoys at Sand Harbor with her children. She and her husband have a “yours, mine and ours” family including three daughters and one son. When she isn’t chasing her children around or driving carpool, she is likely grading papers for her dream-job as an English professor at TMCC. Lenaya lives a life full of adventure in ways she once thought impossible. Married to an outdoorsman, her children benefit from the combination of a roller-coaster-junkie-mom and a dare-devil-dad. Passionate, enthusiastic, and short fused, she has learned that motherhood is her greatest privilege and most grueling trial. The relentless demands of her four kids are always accompanied by love and lessons only children can offer. Regardless of the curve balls, she has a “pinch me” life exceeding her wildest imagination.
Previous How Coffee and a Pinwheel Can Help Stop Child Abuse
Next My Facebook Detox